Named after Lt Colonel Eruera (Edward) Te Whiti o Rongomai Love, who was a former Māori All Black and Lieutenant Colonel. Nearby Te Whiti Park is also named after him. The street was unveiled on the 26th March 2021, and the following dedication was written and presented by his granddaughter Susan Love de Miguel. i

The street name was chosen by Hutt City Council’s Regulatory Committee on the 12th May 2020. ii

Lt Col Eruera was one of 7 children of Wi Hapi Pakau Love and Ripeka Matene. His father Wi Hapi Pakau Love was the grandson of Witako Ngatata, the first Maori to be appointed to the NZ Legislative Council in 1872. Lt Col Eruera Love’s mother Ripeka Matene was the granddaughter of Matene Tauwhare and Honiana Te Puni – both were prominent influential Rangatira in Wellington during early settlement.

Colonel Eruera Love was born in Waikawa Bay in the Marlborough Sounds on 18 May 1905. Soon after, Wi Hapi and Ripeka moved their family to Wellington and they built their family homestead Taumata in Korokoro which still stands today.

Eruera was talented in sports loved cricket, rowing and of course rugby. He was a Maori All Black and toured in both the 1925 and 1926 tours of Britain and Europe.

Eruera married Makea Nui Ariki Takau a Tinirau one of the 3 Ariki of the island of Rarotonga. Their marriage was viewed as reconnecting to Hawaiki from where the original Aotearoa vaka and tipuna had departed.

Colonel Eruera Love and Makea Nui Takau had four daughters: Mokoroa Ki Aitu Rio , Inanui Iterangi, Veia Atua and Myra Aroha Memory. They spent three years in Rarotonga where their twin daughters Mokoroa and Inanui were born. They returned to Wellington and set up their home in Waiwhetu. Makea Takau brought some of her extended family with her which was the beginning of the Cook Islands community in the Hutt Valley.

Eruera and Takau were active in the fundraising and building of Te Tatau o te Po marae on the Hutt Road in Petone which often hosted Taranaki iwi who came to Wellington to argue for the return of their confiscated land. Along with all the Love whanau Eruera and Takau were active in the whanau Marakai (plantation) in Waiwhetu currently known as Te Whiti Park. This Park was named in honour of Eruera at the request of his parents in 1946.

Eruera’s military career began at age 11 when he joined the cadets. This was followed by 15 years in the Territorials prior to joining the 28th Maori Battalion as a Commander of DCompany. Commander Love served in Greece, Crete and during one stage of the 1942 Libyan campaign he was Acting CO during two notable actions. The battle of Menastir was where Commander Love, proved his tactical ability when he deployed the companies for all-round defence and in the ambush of a German column.

In June 1942 a new desert crisis brought Freyberg’s division back to the front. The New Zealanders helped to halt the enemy at El Alamein turning back Rommel’s counter-offensive. The two hard-fought victories by the allies at El Alamein were the crucial turning point in the North African war.

It was during this campaign and the attack on Ruweisat Ridge that Lt Colonel Eruera Love was mortally wounded and died on 12 July 1942. He fell and joined the roll of honour of Tumatauenga the god of War. He was 37 years old. 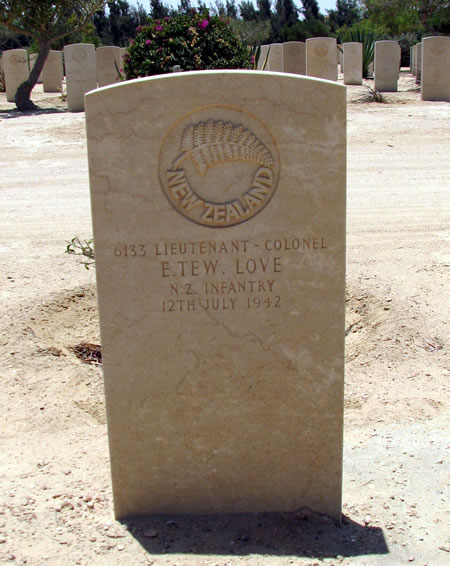 Lt Col Eruera Love is buried in the El Alamein Cemetery in Egypt, in Plot 16 alongside over six and half thousand deceased Allied and New Zealand soldiers. It was his destiny to remain with them for eternity.

In 2020, a 28th Maori Battalion carved Pou was erected on the Picton Foreshore dedicated to the men from Te Tau Ihu (top of the south) who served in the Battalion. Lt. Colonel Eruera Te Whiti O Rongomai Love’s name is also listed on the Picton Pou.

The Pou and the naming of this street in honour of Lt Colonel Eruera Te Whiti O Rongomai Love are in a sense the completion of the Tikanga – Kawe mate – the spiritual return of the deceased to their whenua and their whanua. – Nau mai Haere mai e te Papa.